Miss the dev stream? Itching to know all the exciting developments coming soon for Quake Champions? We’ve got you covered. We sat down with Technical Director John Dean; Monetization Designer David Saunders; Esports Manager John Hill; and Gameplay Programmer Jason Lyons to bring you the scoop!

If you’re looking for a quick rundown of all the new stuff, you’ve come to the right place. If you want to watch the full VOD—and we suggest you do!—you can check it out on Twitch.tv/Quake.

We have even more improvements, functionality, and community-requested features in store for AI opponents! Lead Programmer John Dean delved into the machine code to give us a look at what to expect.

Want to practice your skills before jumping in to matchmaking with other players? Coming in August, we’re making it easy to add bots to your Custom Games! Players will be able to add bots and adjust basic settings initially, with expanded options coming in the future!

Sometimes you just want to relax with friends (or strangers who aren’t yet friends) and blow up some bots. For this purpose, we’re going to introduce a new “Vs. AI” Team Deathmatch mode, where you and 3 other players team up to fight against a team of bots!

Bots are deadly accurate—sometimes too accurate, due to the way bots perceive player hitboxes. In August, we’re scaling the size of player hitboxes as viewed by bots so that they aren’t quite as deadly with their aim. (If you’re interested in the technical aspects of this change, check the VOD! It’s neat stuff.)

We’re also improving navigation (so no more running into walls), as well as weapon and item management behaviors.

Beyond August, you can look forward to bot support for all game modes, and bots that know how to use their Champion abilities!

We’ve got some short-term changes coming up with cosmetics and player rewards that we think you’ll be excited about!

One of the things we plan to change frequently is the daily login rewards. Very soon, we’ll be increasing the rewards you get and shuffling a few of the rewards around. You can also expect extra rewards during special events: the first of these will be the week of QuakeCon!

Will there be updates to the loot boxes?

We’ve been making changes to the game economy with every update—and sometimes between updates! (In fact, by the time you read this, more changes might have already happened!) Right now, players are receiving more duplicates than we’d like; we’re going to be tightening this up to reduce the frequency of duplicates. We also want to differentiate further between Chests and Reliquaries, with Reliquaries having better drop rates and items you can only get from them.

What about making (insert item here) available in the store?

Every Thursday, we have new featured deals on Champion skins, vanity items, and cosmetic weapons. Players have been asking, “When can I get this weapon?”—we know you want that Plasma Gun—and it is our general intention that unless a weapon is for a special event (such as the Quakecon 2018 Heavy Machine Gun!), you WILL eventually have an opportunity to acquire it in the Platinum store! Who knows, maybe even sooner than you think?

Our players have asked us, “How can we help support Quake esports?” Well for a limited time you can with the upcoming Esports Showdown bundle! This bundle is the best value we’ve offered, with the new Quake 4 “Redeemer” Gauntlet, 7-day XP boost, 2 Reliquaries, and 200 Platinum. This is also the first bundle that you can purchase multiple times, and know that you’re helping to grow the Quake Champions tournament scene! Look forward to it in the store.

And speaking of esports…

QuakeCon is just two short weeks away, and you know what that means: tournaments, tournaments, and more tournaments! Beginning Friday, August 10, we’ll be streaming the QuakeCon Open 2v2 tournament on Twitch.tv/Quake. With $200,000 in prizes, we’re sure to see some intense competition. 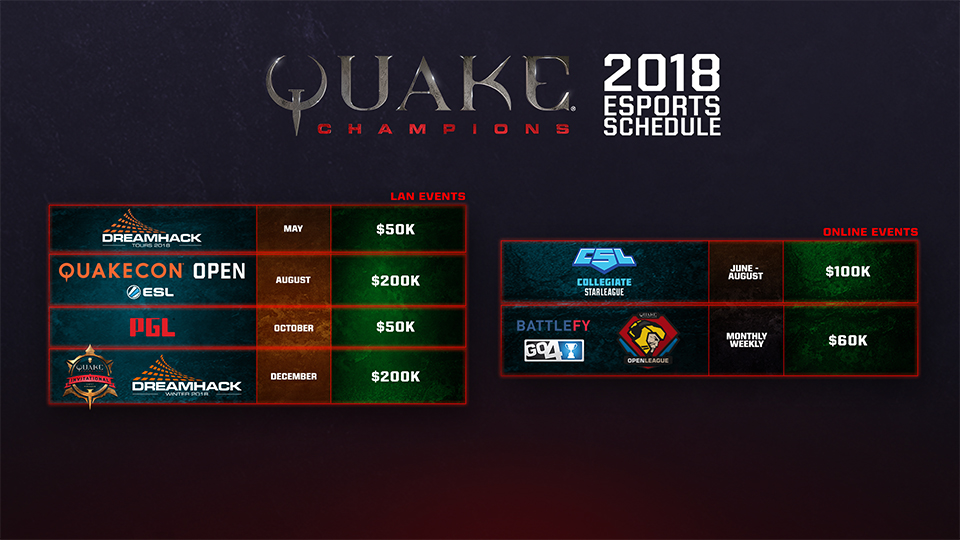 The QuakeCon Open will be followed by the Collegiate Star League finals, capping off the Quake Collegiate Championship season. College teams from around the country participated for a chance at a $100,000 scholarship prize pool, and the remaining teams are in the final stretch!

Last but not least, on Sunday, the top 16 players from the top 8 teams will compete in a winner-takes-all Duel Showdown! Mettle and camaraderie will be tested as players will compete in 1v1 Duels, with one final winner taking home the entire $25,000 prize!

What’s after QuakeCon? We’ve got PGL and DreamHack Winter coming up later in the year, in addition to more online events! Keep an eye on our esports news and calendar for all the latest!

This is what you’ve been waiting for! On the livestream, Jason Lyons announced multiple new modes in development that you’ll soon be able to play!

You hoped, you speculated, and now your dreams are coming true: Capture the Flag is CONFIRMED! The quintessential team-based mode that started it all, in Capture the Flag, two teams will vie for control of the enemy team’s flag while protecting their own at all costs. Currently, the team with the most caps after 20 minutes wins, but we may implement a flag cap limit. Matches are played in two 10-minute halves, with teams switching positions at the half. Champions also cannot use abilities while carrying the flag.

This is the mode players have been waiting for, and as Quake Champions is very community-driven we want to heavily involve you in the creation process. Our plan is to get CTF onto the Public Test Server soon and have the community weigh in with your feedback. This mode is very much a work in progress: with your help, we’ll be iterating on it to make sure it’s awesome.

Slipgate is a brand-new mode in development that blends the elimination-based gameplay of fan-favorite Clan Arena with an objective. In this 4v4 offense vs. defense mode, the goal is for the offense to seal the defending team’s slipgate portal before it opens completely—the defenders must eliminate the attackers to win. The catch? Everyone only has one life! There are no respawns in this mode until the round is over! 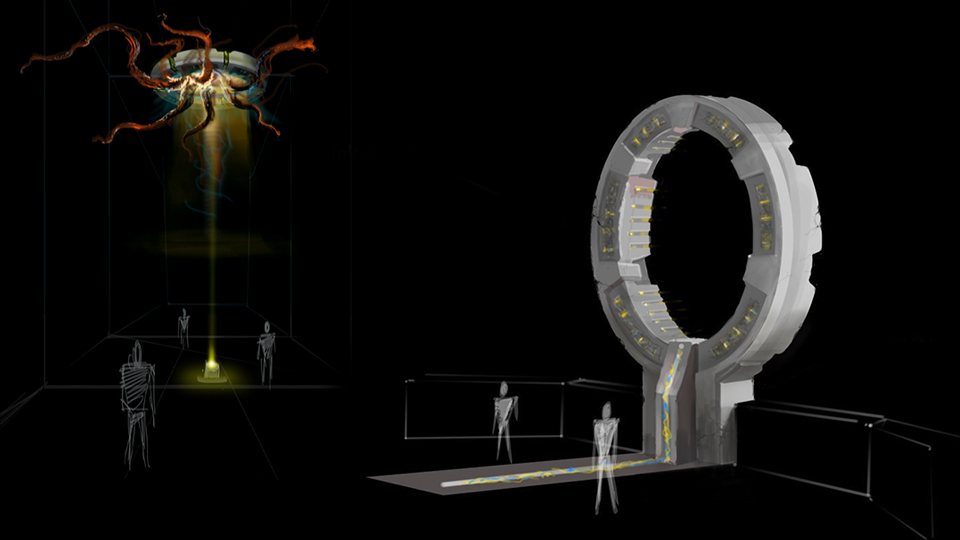 Players select their Champion at the start of each round and, like Clan Arena, spawn in carrying all weapons and with full health and armor at overmax limit (decays naturally), and full ammo. Once a player dies, they can spectate their teammates to cheer them on. (And maybe pick up some tips from spectating!)

Slipgate is another mode we’re looking to get your feedback on once it hits the PTS, and we hope players will really enjoy it. We think it’s a mode that we think will be especially great for all of the awesome streamers in our Quake community.

In addition to the mode itself, some great features have been built for Slipgate that can be implemented into other modes in the future, such as 3rd person cam, team HUDs, and round-based Champion selection.

We’ve been working on creating new tech that allows us to rapidly generate new gameplay modes where the rules change how the game is played. Examples would be a “rockets only” mode, a mode where every kill cycles you to the next weapon, or a mode where Champion selection is completely random every respawn. We have a ton of ideas—and we’d like to hear yours!

The Arcade will be a separate queue outside of Quickplay and Ranked where players can drop in and play a few rounds of Quake Champions with wildly different variables for an intensely fun Quake experience.

We hope you’re looking forward to all the new modes, content, and improvements coming soon to Quake! Stay tuned for more news at QuakeCon!